It's time to enter your team's work too. Don't delay as the deadline of 31 May is fast approaching. See the ENTRY FORM here and contact with any enquiries.

Both the previsualization and postvisualization teams helped to solve the creative challenges of the sequence. The work carried out within pre-production helped set up successful production on set as well as when moving into post-production.

The creative collaboration that began in pre-production shows clear visual links to the final cut of the film. It was important to encompass an authentic representation of Hong Kong’s vibrant night-time cityscape. In the preliminary stages, MPC Film received concept art of King Kong and Godzilla towering amongst the multi-coloured city lights of Hong Kong, saturated in a blue haze.

A primary focus for MPC Film’s team was to re-create the specific lighting concept, including the colour scheme of the city’s neon lighting, as well as demonstrate the scale of Kong and Godzilla. Developing a dynamic depiction of Hong Kong, the team ensured these striking colours accurately lit the characters during their destructive clash, leading up to a fiery vision.

New proprietary software named Populate HK (Hong Kong) was created for Godzilla Vs Kong, a script based on PACS built by MPC Film CG Supervisor, Joan Panis. Any updates undertaken in the main environment could be easily integrated into new shots, including animation. Populate HK would read all information and prepare the city for render, involving only the visible sections to make them less heavy to render.

The majority of the Downtown Battle shots were full CG and include massive complex destruction FX while maintaining the fragmented appearance of the destroyed buildings and shattered neon lights flickering among the mass destruction. CG Supervisor Timucin Ozger, created an automated Houdini destruction workflow scene that worked with the Lighting department renders, thereby keeping the scene consistent. MPC also upgraded their Parallax Shader to make the skyscrapers look photorealistic.

The animation team’s main challenge was, of course, creating the fierce, dynamic battle to show not only the monsters’ tremendous scale, but also showed the emotion in their faces. The animators had fun acting out and choreographing the battle, and then reinterpreting that performance into the key-frame animation. Another challenge was creating a loving, non-threatening interaction between Kong and Jia, despite his size and intimidating appearance. It was essential to express the emotion perfectly to sell his feelings without words.

The One and Only Ivan

Another feature film entry from MPC is ‘The One and Only Ivan’, a film led by animals, with large passages of script absent of human performers. MPC helped conceive a custom production workflow that allowed director Thea Sharrock to realise such a project. MPC animated the nine main characters, from Ivan the Gorilla and Bob the dog to Murphy the rabbit, and created the film’s photoreal full CG environments and digital set extensions.

‘The One and Only Ivan’ had two different shoot phases. A traditional set-and-location shoot, and a Virtual shoot for the full CG shots – about half the movie. The virtual process started with Black Box rehearsals with puppeteers and motion capture for Ivan, which Thea used to block the sequences before shooting. A 2-week motion capture stage shoot followed for Ivan’s movement and puppeteers played the other animals as a blocking layout for MPC’s animators. Ivan's mocap data led the blocking, although all characters were keyframed.

Nick said, “Once the master scenes' animation had been approved, the clips were used to drive MPC’s Genesis Virtual Production tool kit – VR tools used to capture the data through virtual camera tools. These include dollies, camera heads, cranes and steady-cam. The film makers used these to shoot the master scenes on a stage and viewed pre-recorded animation clips from any perspective.” MPC replicated 'Backstage' set as a digital model, so that the filmed footage and full CG shots would blend.

The Environment team also built full CG shots of the African plains, jungle and other environments, always matching the full CG shots to the cinematic look of the live action sections including camera, lens and set lighting effects.

Thea’s brief for Ivan and the other characters was for photorealistic, talking animals, but above all they needed to connect with the audience and deliver the humour and emotion essential to the story. For much of the movie, Ivan is confined to a cage. The bring the audience closer, the filmmakers wanted close ups that required crafting the face to the finest detail. MPC’s Character Lab team exhaustively researched gorilla bone structure, muscles, subtle movements and behaviour and, most important, their eyes.

Ivan’s eyes had to express his thoughts and emotions to the audience with great subtlety. One handsome gorilla in particular named Zawadi became a favourite, and a main reference for Ivan. From chickens to elephants, in ‘The One and Only Ivan’, a balance had to be struck for all of the animals between true animal behaviour and an engaging, emotional performance. 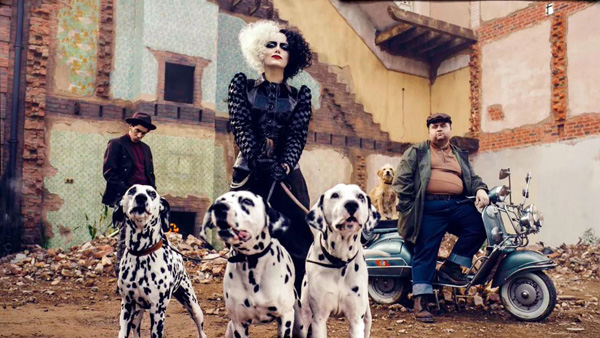