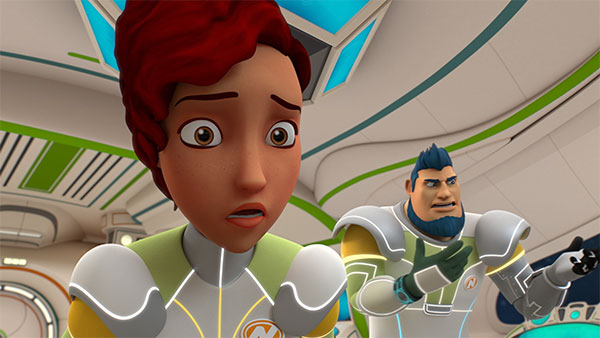 It’s the year 2162, and life is a blast for space adventuring siblings, Jet and Adelaide Nova. Along with their parents, Josie and Hugo, these intrepid Aussies spend their days hopping rogue planets, surfing solar flares and avoiding being eaten by every kind of plantimal - all in the name of science! Still, what the Novas really want to do is meet intelligent extra-terrestrial life - something humanity has yet to do… Then everything changes... During a routine research mission, the Novas stumble across an abandoned alien space craft trapped in a Celestial Butterfly. Even more incredible, this craft – made entirely out of rock - appears to be powered by a rainbow substance that's so powerful it sends the craft zipping away at speeds humanity never dreamed possible. Although the Novas are unable to capture the craft, or the 'Star Dust' that powers it, they now know that there is an advanced, intelligent species out there who can travel the universe in the blink of an eye and set off on a quest to find them! While such a huge quest would stop most people in their tracks, the Novas aren’t your average family of explorers. First there’s 11-year-old Jet, a brilliant young adventurer and biochemist who divides his time between interstellar missions, grav ball and creating bizarre genetic experiments in his lab – often with disastrous results! 13-year-old Adelaide is also a fearless young adventurer – though her greatest passions are robotics, technology, and getting her full starship pilot’s license. Mum, astrobiologist Dr Josie Nova, is the real-life action hero of the family, combining her love of nature with a passion for adventure, while dad, Dr Hugo Nova, prefers the slightly more subdued study of astrogeology and history. Still, with his super-strong robotic arm he can be handy in a tight spot! Completing the family is family robot, G9, who may have databanks full of useful info, but is a terrible worry wart, often being the first to flee when danger rears its head! And danger is coming, not only in the form of more dangerous creatures and forces than the Novas ever dreamed of but also Aubrina Eridani, President of Luna Port, and her smarmy son, Sol. Suspicious of the Novas’ ‘classified missions’ following the trail of the stardust rock ship, Aubrina and her son seem intent on spying on the Novas at every turn. But do they want the glory of discovering stardust for themselves? Or is there a more sinister plot afoot!?