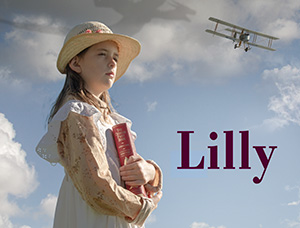 In 1916 ten year old girl, Lily is enjoying the presence of her older brother, Michael, who has returned to the family home for Christmas after having trained to fly in Auckland. He has been commissioned to join the war in Europe as an aviator but to Lily, Michael is still a hero prince from The Crimson Fairy Book, her prized Christmas present. On the day after Christmas, Lily tries to persuade Michael to act out stories with her but he declines. Later in the evening as he reads stories to her from her book, Lily makes Michael promise to return in his aircraft to take her flying and to describe to her what it’s like in the sky. Michael tells Lily, “You can go anywhere you want”.

Months after Michael has left for Europe, Lily is still inconsolable. At a family mealtime, Lily’s father George Kimbell reads a passage from the bible and rather than bring comfort to Lily it disturbs her and she runs from the house to a large, open field, Lily is delighted to see Michael land in his biplane to take her flying. He tells Lily “There’s a job to be done”. Suddenly, they are thrown into an aerial battle against a fire-breathing dragon. With Michael piloting the plane, Lily fires a water cannon at the dragon in a fierce dogfight. Finally, they vanquish the beast’s fire, but their relief quickly vanishes when the dragon rips off the biplane’s tail with it’s long tongue. Lily is now faced with the realisation that even in her fairytale world Michael can’t remain with her for long.