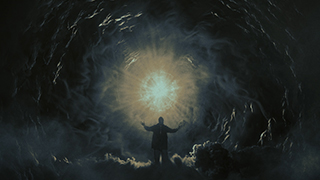 In a collaboration between YZY & Gap, Mill Paris were tasked with creating a visual universe that illustrates Kanye West's faith as part of his Heaven and Hell music video, to be treated as a modern piece of art inspired by the Romantic artists Gustave Doré and John Martin. He brought together a collection of international artists including director Arnaud Bresson.

Shooting live on the streets of Paris, The Mill helped blend live footage with entirely CG scenes. While most projects start with art direction and move on to production, in this project the two phases were developed simultaneously. Paying close attention to references coming directly from and client and the director – mainly works by John Martin and Gustave Doré -- was critical, and motivated the artists from the start. That focus led to discussions on the light, composition and the essential representation of Paradise and Hell.

The FX aspects, tornado, smoke and character simulation, brought large-scale challenges. They had to be realistic and pictorial while keeping the right balance between the given references and the filmed part of the clip. Because the animation was also expected to maintain continuity with the shoot, the team proposed and used motion capture. It was also necessary to manage a crowd of characters in a hurricane of smoke, while keeping the shots readable and without interfering with those aesthetics.

The final challenge lay in also rendering the 3D in a way that matched the art direction and artistic references. They needed to ‘break’ the 3D as much as possible to make it look like a painting. Dealing with both Kanye West’s CG avatar and the simulation of a crowd of ghostly angels moving through a cyclone of smoke, they could see straight away that the effect was going to be very heavy to produce. A digital double of Kanye West was also needed to help integrate him into the shots. Creating the final scene involved rebuilding a complex John Martin painting ‘The Fall of Babylon’ as a CG version in record time. www.themill.com