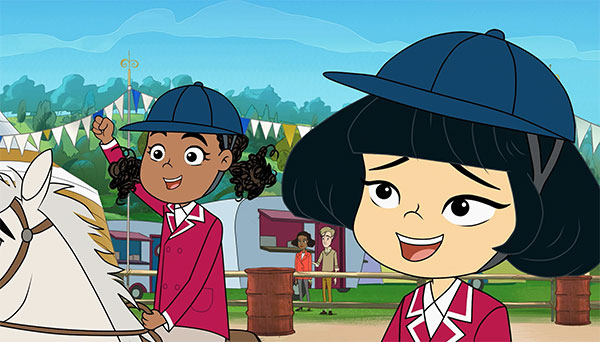 This is the latest story of Alice-Miranda Highton-Smith-Kennington-Jones, an extraordinarily vivacious 10-year-old-girl, and her adventures at the Winchesterfield-Downsfordvale Academy and beyond. And for Alice-Miranda, Millie and Jacinta, the new school year holds no shortage of excitement and surprises.With themes of life-long friendship, bravery, kindness and nobility throughout… this brand-new story with well-loved characters will delight 6 to 9-year-olds everywhere.The adventure starts on a royal cruise with Alice-Miranda’s Aunty Gee, Queen Georgiana. But all is not well, with the Queen receiving anonymous threats and security being on high alert. After a spate of jewellery thefts onboard the girls investigate, only to catch the thief red-handed as he makes off with the royal crown jewels! After an exciting chase he escapes with the jewels… seemingly never to be seen again.Back at school, it’s time for the Winchesterfield Country Fair, where the girls enter pony races and the Queen’s Cup draws an excited crowd. But Georgiana herself is in hiding with Alice-Miranda’s Granny Valentina, her oldest friend. When Bony, Alice-Miranda’s pony is horse-napped, the girls discover the thief meant to steal Popstar, the Royal dressage mare and sabotage the Queen’s Cup. Thanks to Alice-Miranda and Millie’s quick action Bony is saved and the competition goes ahead, with Aunty Gee riding Popstar in disguise.Unfortunately, the Queen’s Royal Silver Jubilee Ball, due to be held at Christmas, is cancelled, until Alice-Miranda convinces security that her school is the perfect secret venue. The students all pitch in and the school is glittering like a Christmas bauble by the time the Royal party arrives on the night. But Alice-Miranda uncovers a treasonous plot to end the Queen’s rule, by none other than her nephew, Lord Lloyd Lancaster, to play out that very night. Our young heroine has no doubt that Lloyd is a scoundrel and at the last minute exposes him as the crown jewel thief and horse-napper. He carried out the thefts in disguise and made threats to her security to destabilise the monarchy and sow seeds of doubt about the Queen’s ability to rule. In the nick of time Alice-Miranda rides into the ball on Bony, with the missing crown jewels and a signed document proving Queen Gee to be the rightful monarch. After Lloyd is taken away, all that’s left to do is enjoy the ball, and that’s what everyone finally does… students, teachers, friends, royalty and even the ponies.