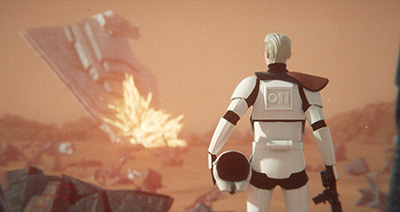 Bucketheads follows Torin Sereta as he struggles to maintain his loyalty to the empire after the destruction of the Death Star II. The title design reflects this inner turmoil and portrays the imperial soldiers as toys in a political game of power. To accomplish this we opted to portray the empire’s fall as a series of toy playsets like those released during the 90s as part of Star Wars’ aggressive marketing push. Swapping to a more overt toy-like style fed perfectly into the heartless way Stormtroopers are seen: mass produced and disposable. It is through these feelings of worthlessness that we see the title sequence through.