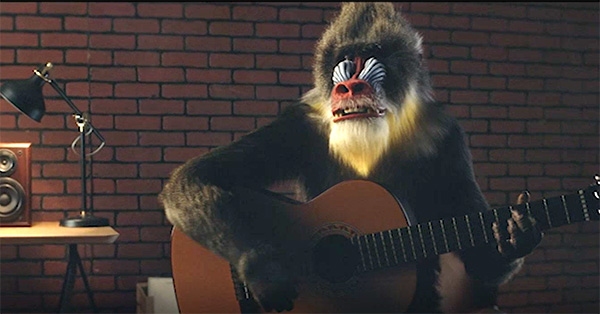 We found a lighthearted and humorous way, to tell a story of human longing for nature. Tourism is associated with travels to places closely related to nature: seaside, tropical forests, and islands. The mandril became the main character for a reason. The animal resembles a human enough to animate it in the typically human environment, showcasing how it performs human activities. At the same time, it is attractive visually, exuding the aura of exoticism, bringing the faraway travels to mind. We see a charming, atypical mammal, with a thoughtful gaze, acting like a human. Thrown into a corporate environment, it seems to be completely out of place, portraying human yearning for nature. To portray the mandril's initial discontent we made sure its fur is tangled and not well maintained. Only later it becomes pretty and seems nice in touch. This change in appearance externalizes the shift in mandril's emotions. The fur itself was a challenge. To make it look real we made sure to have a life-size model of the animal as well as a ball of fur on set. It was present in most of the shots, allowing us to see how the fur looks in certain lighting. We got around 500 photo references of the mandril from the Warsaw zoo which helped to convey its looks and behavior. Three animators worked on bringing the character to life.

We wanted to give the viewer possibility to identify with the main character's emotions. That's why we adapted the music video narrative, telling a story of an average person, probably a corporate worker who craves to break out of the mundane. The film uses a music track that is all about routine and boredom. 'Nothing ever happens; Nothing happens at all!" says the song's chorus. This was the base of our idea, about a man who has become like a caged animal, who only returns to his human form at the end of the film, once he has booked a vacation to a beach retreat. The execution was inspired by artist Walton Ford's animal portraits.