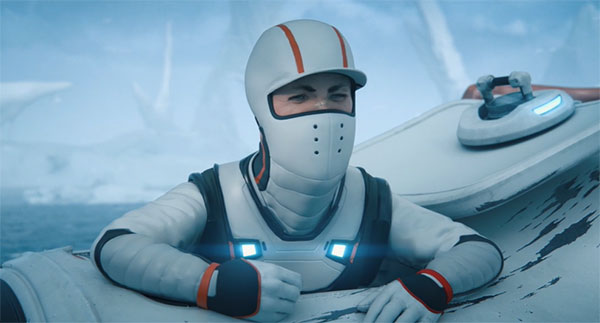 The launch trailer for ‘Subnautica: Below Zero’ is the third cinematic trailer created for this much-loved open world survival action-adventure game. Set two years after the original game, and in the arctic region of Planet 4546B, the game marks a new chapter in the Subnautica Universe – a story that the REALTIME team was delighted to help bring to the screen.

There are always many challenges in any CG animation project, and for this project it was the subtle comedy aspect of the trailer. Comedy is notoriously hard to get right and finding that balance of the mundane daily grind becoming increasingly dangerous was the key to building the humour naturally.

The project took around 3–4 months to complete. A big chunk of that was the creative process in preproduction and getting the idea to work and flow.

This project features a lot of simulation, whether that be billowing fur on the snow stalkers or the clothing of our hero character. We really wanted to sell the visceral experience of the protagonist so we decided one way to do that would be through the realism of the simulation work. We felt even though it is not a photorealistic-looking world, you would feel more for the characters if the level of detail was relatable.

The team is most proud of the small details in this project. Again, we latch onto small details as being relatable. So, sipping on a hot coffee before the daily grind begins, with the steaming aroma wafting up your nostrils, or beating down into the icy ground as warm breath vapours escape through your mask. It all adds to the viewer experience, and it matters a lot. We feel this level of attention to detail is what we are most proud of in our work here at REALTIME.