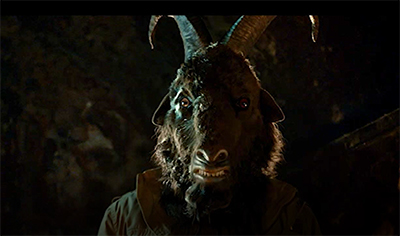 With a shot count of 90, ROTG II was Absolute's biggest project to date. The visual effects within the film were super extensive, including subtleties such as augmentation of fur, screen comps, eye replacement, grade and beauty clean-up.

But the metamorphosis of man-to-goat and turning a limestone quarry into the Utah desert were particularly complex post-production processes. The former allowed Absolute's CG team to solidify the groom and creature FX pipelines. Being on set to monitor the cinematography and performance of the transformation sequence was incredibly useful.

Absolute used a cloth simulation in Houdini to successfully ‘tear’ the actor’s face away and reveal the goat beneath, working to a particular style of animation briefed in by the client and using a complex rig with both goat and human elements. As always, remote working brings its own challenges and passing this kind of detailed data between parties can be complex, but our Modeler, Rigger, Animator, CFX artists and Groom Artist did an amazing job in keeping communication clear throughout. The scene was shot in an amazing cavern-like wine cellar, which ran under the town of Maribor, Slovenia. We took a lot of survey data, HDR panoramas and lidar scans of this incredible place, so that we could accurately recreate the environment in CG and produce believable lighting.

The team also utilised CG, alongside DMPs, to create set extensions and turn a quarry into the Utah desert for the hero title shot sequence. The title shot itself was so dramatic – a real money shot with a dynamic camera move, so we didn’t want to overshadow it with the surrounding environment. In the end, we found just the right balance between believability and brilliance.

Otto and the team completely trusted Absolute to develop their vision; really championing us to push the boundaries.