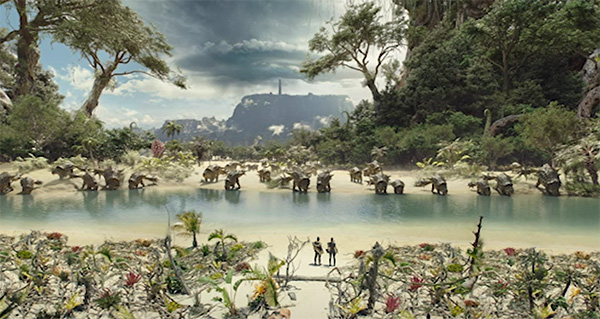 BlackGinger supplied all the VFX for the Apceros sequence from Monster Hunter. This started with previs and postvis for the sequence, as well as adapting the creature designs from the game for the needs of the film.

The set had limited trees and plants and were not of the fantasy style or scale required, so extensive forest extensions were needed. These also had to be dynamics ready for when the flaming stampede of elephant sized creatures came storming through. The dynamics and destruction systems for the trees were all set up in Houdini. Due to the large scene size and complexity of the trees we implemented a point cloud based layout system for positioning and scaling the trees. This allowed for proxy trees in the viewport, with the high res trees being delay loaded at render time. We pre-cached different levels of wind simulations for each tree so this didn't have to be simulated per shot. We then had a system that calculated which trees got collided with by the Apceros and these were swapped out with dynamics-ready trees that could then be simulated per shot, based on the Apceros animation. These trees would bend and break on impact.

With the ever increasing number of Apceros in each shot we ended up with a lot of full CG shots with digi-double actors in them as this was more effective that trying to integrate live action plates with so many CG elements.

Other elements included muscle systems for the Apceros and dust, sand and debris simulations.