His Dark Materials: My Daemon 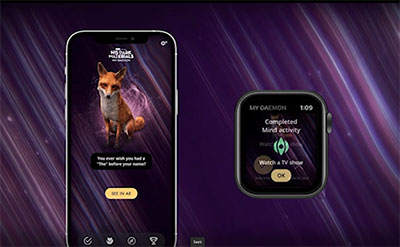 His Dark Materials: My Daemon

To celebrate the launch of His Dark Materials Season 2 and create an engaging user experience for new and existing fans, HBO created ‘His Dark Materials: My Daemon’ -- an augmented reality (AR) iOS app that lets users discover their very own “daemon” (an animal-like manifestation of one’s inner soul in the series) taking them on their own immersive journey through the world of His Dark Materials.

The app brings narrative elements from the show into fans’ daily lives through everyone’s most used device: their phone. Tapping into surging consumer trends around devices encouraging self-improvement and a general need for wellness during the pandemic, HBO created a first-of-its-kind entertainment app with wellness benefits. As each user interacts with their daemon, they are encouraged to participate in activities that contribute to overall health in mind, body, and spirit. The app detects everyday activity through Apple Health and Spotify, syncing with favorite fitness, sleep, and meditation apps. Daily habits, hobbies and new challenges become fuel to progress further. It also integrates with a Watch iOS app to allow users to connect with their daemon through a simplified interface at any time.

Inspired by the series in which daemons are unique to each person, the app features a variety of possible combinations of animal type, skin, fur pattern, and personality, which are determined through a short, visually engaging introductory quiz. Users gradually unlock new badges, poses, and AR animations as rewards and can share photos and video of interactions with their daemons in real-world surroundings to social media feeds from their mobile devices.

With the original concept centered around a location-based entertainment installment for Comic-Con 2020, a strategic pivot was necessary once COVID hit, leading the team to design an experience that fit with the new landscape and delight as many fans as possible.

The iOS app is built using Unreal Engine and utilizes ARKit. As Unreal Engine doesn’t natively support the WatchOS, we built separate mobile (UE4) and watch (Xcode) apps, which was then merged into one.