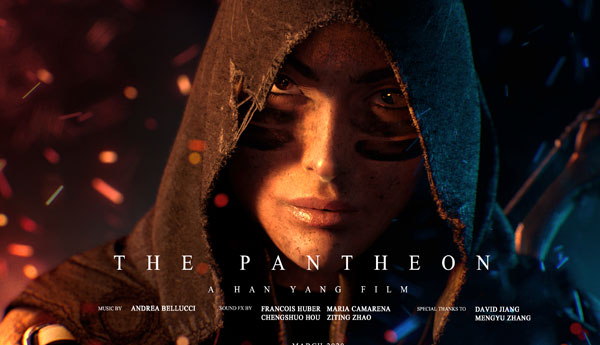 Story:
During the age of the Black Magic, stories were told that a space crystal is the key to unlock a portal between two worlds. Whoever acquires the key can unlock the portal at a lost temple called The Pantheon. The story begins with the battle between the Archer and the Orc.

Brief:
This film has been in production for almost a year. After releasing the last short The Lander, feedback from the creative community was overwhelmingly positive. With the experience from The Lander, Pantheon is a new exploration in different genres and overall upgrade to the workflow and visual fidelity. Being able to utilize motion capture really brought the characters to life and allowed the design of complex action fighting sequences. Music and sound design also helped to immerse the audience into the film’s magic world.

In terms of the production and workflow, most of the work was done by Han Yang including animation, shading, lighting and rendering. Music was composed by Andrea Bellucci, with years of experience with Hollywood style music scoring, his sound track brought the epicness into the film. Sound effects was a collaboration between a team of four artists, Francois Huber, Maria Camarena, Chengshuo Hou and Ziting Zhao. They designed all the foley and sound FX including sword fight, energy burst and character dialogue. Unreal Engine was still the main part of the pipeline, where 90% of the shots were rendered from. Real-time rendering technology is getting better and better each day, the gap between offline photoreal render and real-time engine rendering is shrinking.