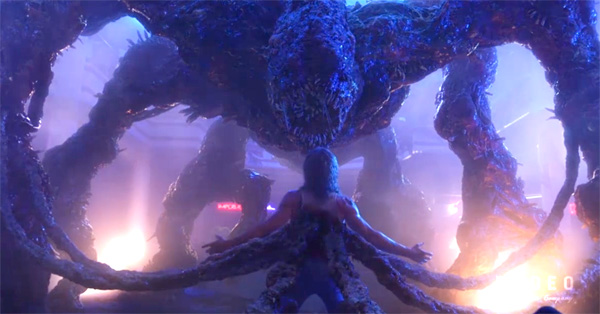 Our team was the main vendor on the 3rd season of Netflix's popular show Stranger Things, headed by the Duffer Brothers. For this season, the Duffers were inspired by iconic horror movie shots from the 80’s. As a result, our teams brought a wet, slimy look to a huge number of terrifying CG monsters.

We were responsible for all the shots involving creature work, from rats exploding into goop to humans melting into the TomBruce monster in the hospital. Additionally, we developed the fleshy version of the Mind Flayer, the wet and slimy spider monster in all its variations, as well as the cabin fight scene with the tentacles. We also did some establishers of the Starcourt Mall exteriors, as well as flying over and into the abandoned factory.

The other main challenge in the show's VFX were the fireworks for the "Starcourt Mall Battle" —as in, would they be CG or practical—our team came up with a full CG test using temporary assets and the result was very successful and proved to be the way to go for the final episode.

Stranger Things was an international project at Rodeo. We shared the work between offices, with assets and look development in Quebec, and animation, lighting, and compositing in Montreal. The Munich studio tackled FX work and compositing