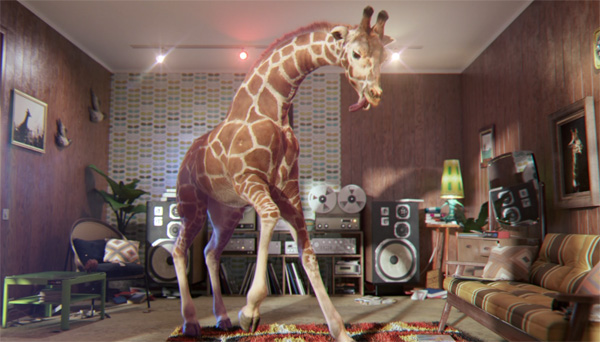 The SOUNDS LIKE TRIPLE M brief came to us from the incredible minds at local agency Thinkerbell, and with it, started a wonderfully collaborative process of bringing a little piece of all of us to life through Triple M’s latest ambassador – Bruce the giraffe.

A modern day personality embracing a late 20th century lifestyle and rockin’ out to the tunes he simply can’t get enough of.

For us, it meant creating a singing and rockin’ giraffe as well as the 70s styled music room. It involved modelling a range of throwback assets such as the stereo system, ceramic wall hanging ducks, lava lamp, furniture and other various collectables, along with styling the rooms to suit the period.

But at the end, it was all about the giraffe and we started piecing him together from the ground up.

It started by researching the various patterns of giraffes and adapting these to suit the look we were all after. Once we got him to a look and proportions that we were all pleased with, the next stage involved modifying him with anthropomorphic traits. So his mouth for instance, had to be modified from a typical giraffe’s mouth by moving his teeth forward, as a giraffe’s teeth are further back in their head. His dancing style also required some minor bone modifications but interestingly enough, the swinging neck action he does in the commercial is based on actual footage captured in the wild.

The beauty of creating the rooms digitally gave us the flexibility to scale the room itself proportionally to fit the giraffe’s action. Had we relied on a live action set, we would have been raising the roof or pushing out the walls in post on a shot by shot basis, where as this way, subtle adjustments could be made quickly and interactively.

The rooms also needed to appear ‘lived in’, and as such, all the digital assets were carefully art directed with just the right amount of wear and tear, and placed accordingly. Sure, he seems to break and dislodge items with his dancing, so creating the right amount of mess was also considered in the overall art direction.

We were building and modifying the giraffe and room assets throughout production, and from a technical standpoint, we used a tested pipeline that allowed parallel workflow that automatically propagated any updated assets through existing shots.

The giraffe was sculpted in Z-Brush with the fur created using Ornatrix. Extensive work went in to guiding the placement of fur and painting the giraffe patterns. A muscle system was also simulated and we custom built the giraffe’s rig which allowed for the particular movements expected of an all singing, all dancing giraffe.

Final Compositing was carried out in FLAME with pre-compositing assembled using FUSION.