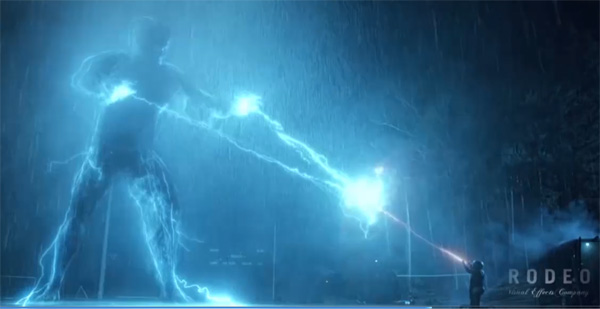 The work on this great new series from Netflix began with the bending tree sequence of the first episode, which involved replacing the entire environment with procedurally animated trees. We were then tagged for episode 4 to animate a root system coming out of the ground. The initial two episodes set the tone for our work on the show, requiring extensive R&D for complex FX. Episode 5 was a fun challenge for our compositing team who created the beautiful aurora borealis display.

Along with these main sequences, we also worked on  makeup augmentation and adding sub-dermal effects on a few characters, which involve tight body matchmove and subtle compositing of multiple procedural textures. For the smoke entity, we created something with personality, so instead of going in a hyperrealistic direction, we created very stylized smoke FX.

The ‘Crooked Man’ in the final battle was the most exciting mandate for our team. We were provided with designs from two other vendors that were used earlier in the season, but the character evolves as the show progresses and so we got plenty of creative freedom to come up with the final look. For the final episode, we were tasked with taking what started as a very abstract entity made of lightning bolts and rain, and creating something that resembled a defined emoting character made from atmospheric elements.