Magic: The Gathering - Throne of Eldraine 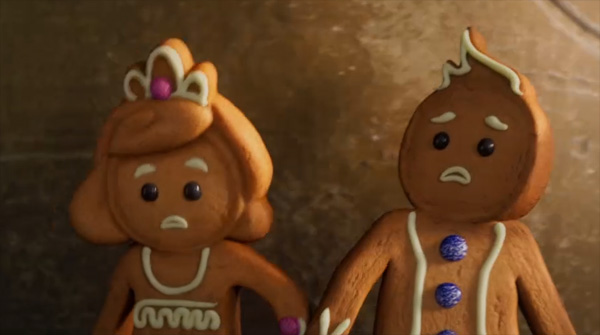 Magic: The Gathering - Throne of Eldraine

Synopsis:
The hugely popular trading card game 'Magic: The Gathering' has gone viral with a cinematic trailer marketing its latest card set. Centring the story around two gingerbread cookies, Axis Studios originally set out to create a 90-second character introduction. In the end, a three-minute-long animated love story came to life. Set in a fairy-tale castle kitchen, all hell breaks loose when fan-favourite character Garruk enters and begins battling the guards. The two gingerbread cookies flee for their lives, narrowly escaping the perils of breaking china, milk tsunamis, and an evil-looking cauldron of boiling soup.

Initial concept art was drawn of a Gothic, Flemish feast overcrowded with food. Naturalistic lighting was later added to complete the look.

- What were the main tools in your pipeline? Did your pipeline take advantage of them in special ways? Have you used proprietary software?

Axis uses the following tools
Maya for previs, animation and also for modeling assets
Premiere for editorial.
Substance Painter for textures, these are then put through our studio pipeline and published into Houdini for final look development.
Animation is published in an Alembic workflow and re introduced to Houdini CFX (Vellem) for FX work and Lighting, rendering was done using Arnold. Compositing completed in Nuke with final balancing and colour grade in Davinci Resolve.
This was the first time Arnold had been used to render a full project within Axis.

- How much time did you devote to the project?

- What was challenging, easy, surprising, fun? What did you learn?

The challenge with any established IP is staying faithful to the brand’s famous game card illustration and established fan base already deeply embedded within the existing lore while speaking to a wider audience, bringing to life and developing the characters and worlds in a 3D.

The time frame on this project of 14.5 weeks (16 weeks total including story development) was challenging, as were the amount of FX shots - 46 shots in total, with 30 shots containing FX. Having two characters joined together for 90% of the show was a fun challenge, as was the scale between our main characters and the fight going on around them.

We learnt never to work with children, animals or, in particular, gingerbread people.

We learnt a lot about the Dutch Masters, looking at intricate details of still life paintings including how light interacts with different objects and surfaces, since we had many up-close shots of the dining table adorned with food, jars, and cooking utensils. We wanted to reflect the detail of the still life paintings of The Dutch Golden Age.

- Have you achieved something groundbreaking in this project that you want us to know about? What has been done for the first time?

The trailer gained huge popularity and went viral, racking up 9 million views on Youtube and trending at #3 worldwide 24 hours after its debut.

It was a great achievement pulling the project together in such a compressed time frame with all the challenges involved.

It was the first project where the studio used Arnold, so implementing this into our pipeline was great, particularly for render speeds since every object had such high attention to detail. This saved rendering time which meant we had more iteration time to perfect the outcome and created a huge shift in the pipeline, leading to the client/production team prioritizing collaboration above traditional workflow. The new pipeline helped better facilitate communication and problem-solving, which meant fewer director and client reviews per department and more reviews watching the work in context. Given the agile nature of the extremely collaborative effort, timelines became dramatically less of an issue.

Client - Wizards of the Coast